It doesn’t take long after becoming a parent that you start to become hyper-aware about the choices we all must make when to comes to the things that entertain our children.

Sure, there are questions like “How much screen time is okay for a 2-year old?” and “What age do I let my kids watch Star Wars?”, but I’m talking more about questions like “How do I make sure my kids never, ever fall in love with Barney?” and “Is there any children’s music that isn’t terrible, annoying, or both?”

Thankfully, if you really take the time to look, the answer to the latter is a resounding “yes.”

One prime example comes from Portland indie artist and musician Julianna Bright, who created an alter ego of sorts by the name of Cat Doorman as part of her foray into the kids music scene.

Her first album, the Cat Doorman Songbook, is one of the most wonderful collections of unexpectedly lyrical, catchy, clever, whimsical, touching, and inspiring folksy songs that our vehicle’s CD player has had the pleasure of playing.

And playing some more.

Because my boys just can’t get enough.

I asked them which of the songs were their favorites, and their answers, though shifting constantly the way those of very small children do, always seem to come back to two tracks: the funky “Yeah!” and Cat’s adaption of the classic “Little Red Wagon.”

I have to admit I’m partial to “Yeah!” as well, particularly the lyrical back and forth between Cat and her child vocalists, which I have a blast singing along to with my boys as we drive around town:

Another favorite of mine is the alphabetic song “So Many Words,” which is not only super catchy but also astoundingly high-thinking in its word choices for each letter of the alphabet. There’s no “A is for Apple” here. Rather, A is for Agate, Allosaurus, Aeronautic, Atom, Abacus, and Archipelago.

And that’s just A! I love songs that don’t talk down to kids, but inspire them (and their parents) to learn more.

This collection of songs doesn’t just inspire to learn, but it inspires to create, to imagine, to dance, to clap, and to bask in creation.

Check out this section from “Turn Around,” and tell me that it’s the same old same old kid’s music you would hear from a certain purple dinosaur:

Looking out the window of a moving car,
The radio tuned down low.
The song says to believe in something that’s better,
So let us go.
We’re not some little wounded birds, come to flitter,
Or to be studied in a cage.
We’re stronger than you think,
And we may just be the ones to turn the page.

We enjoyed this album so much, that when I found out Cat Doorman and her band were going to be appearing in concert at TaborSpace in Portland on Mother’s Day, we made plans to attend as a family. It was just delightful, watching the boys dance around to this music they’ve come to love so quickly. And Julianna herself was so sweet with them — even adding an extra number to the set after Tucker walked up and asked her to hold off on singing “Yeah!” until he returned from a quick-but-much-needed trip to the potty. Great show.

The Cat Doorman Songbook is available on Amazon and iTunes, and I’d highly recommend it. You can find her on Facebook as well, if you’d like to know more.

Want a copy of your own?

Well you’re in luck! I’ve got one to give away!

Enter by liking/following (or already being a fan) of Daddy Doctrines or Cat Doorman, on Facebook or Twitter, or by leaving a comment below answering “What was the first concert you remember attending as a child?”  Or do them all, and enter yourself five times! 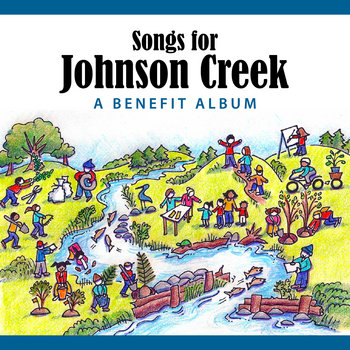 This month also sees the release of Songs for Johnson Creek, a 12-song compilation album bringing together Cat Doorman with other A-list Portland kindie songwriters and performers – from nationally-known artists like Aaron Nigel Smith and Laura Veirs to local favorites like The Alphabeticians and Mo Phillips – to benefit salmon restoration in Portland’s Johnson Creek.

The album will be available digitally from Bandcamp  on May 23, 2013, and all proceeds from sales will support fish habitat improvements.

Note: Promotion open to U.S. residents ages 18+ only, void where prohibited. Winner will be chosen at random on May 23, 2013, and will be notified via email to obtain their U.S. shipping address. If there is no response within 24 hours, or we are unable to verify your entry, an alternate winner will be chosen. Shipping address must be a street address – no P.O. Boxes, must reside in the U.S. Prize provided and delivered by Sugar Mountain PR. Not responsible for lost or misdirected mail.

Disclosure: Daddy Doctrines was provided with a CD of the Cat Doorman Songbook for review. All opinions are my own, and those of my kids.

Get My New Book!

I'm a proud full-time caregiver dad, and the new President of the National At-Home Dad Network. I'm also a children's book author and illustrator, blogger, and accidental activist. Canadian-born-and-bred, I now live in Portland, Oregon, with my lovely (and much smarter) wife and our two adorable sons.

I'm proud to be the newly elected President of the National At-Home Dad Network. Check them out to find out more.